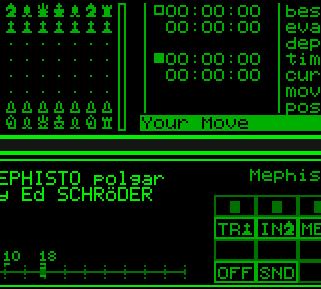 The Emulator is a combined concept using emulation and the classical world champion & top modules for the Mephisto Series and developed for the first series Module Sets and Chess Board. During the years more emulation were added resulting in the current 2019 Full Edition.

It contains all existing Richard Lang Module Sets programs based upon the 68000 processor and the Polgar, MMIV, MMV and Rebel programs based upon the 6502 processor from Ed Schröder. Also the emulations from all programs in the popular Tasc systems are included (Ed Schröder and Johand de Koning). The Glasgow, Super Expert B and C and Diablo programs as well as the Fidelity V2, Nigel Short, Milano, Corona and Sphinx 40 are all emulated (however due to copyrights on the original software these are not included). The speeds of emulation vary from a factor 1 to 15 times faster than the original speeds, giving the programs higher ELO ratings. Tasc Emulations + Risc2500 and Montreux are running at almost original speeds. The Fidelity V2 runs 15 times faster. The Emulations are now available to the Phoenix Chess Systems customers and available for the Revelation II Board System.

You can buy the Emulation Software for 699 Euro including VAT. For this you acquire the emulation, and the Richard Lang license for the Amsterdam, Dallas, Roma, Almeria, Portorose, Lyon, Vancouver and London programs including the needed licenses from Richard Lang. And also the Ed Schröder license for the Polgar, MMIV, MMV and Rebel programs including the needed licenses from Ed Schröder. Also included are the Tasc King and Schröder programs plus the Montreux and Risc2500. For the Novag Robot Adversary, the Fidelity V2, Milano, Nigel Short, Corona, Sphinx 40, Glasgow, Super Expert B and C and Diablo programs, if you own the chess computers, you can also obtain these emulations.

To give an indication of what the emulation can do let’s look through some screens available under the software. The opening screen says it all. Here you select which program you wish to emulate.

Below screenshots for the Polgar and Tasc are displayed.